Why energy management is critical to 5G success

Much has been written about 5G technology being different – both in what it does and how it does it – from previous ‘Gs’. Among other things, 5G has been conceived:

But a big challenge relating to 5G and arising from the growth in traffic on 5G networks is energy and carbon emissions. If not approached correctly, 5G deployment could result in significantly increased energy use by operators. This comes at precisely the same time that key stakeholders and society are demanding greater transparency, accountability, and action on reducing energy use and greenhouse gas emissions. This presents operators with a dilemma: How can telcos pursue growth through 5G and meet sustainability challenges? By adopting energy management best practices, operators can address stakeholder demands and also build the credibility, insights and skills that they need to bring new integrated services to market.

5G can curb excess energy use…

However, as the higher performance and lower cost (per GB) of 5G services will result in increased use and accelerate traffic growth, this will negate some of the efficiency gains. Furthermore, to achieve coverage, 5G networks will initially represent another overlay network requiring additional equipment and energy. Due to the higher frequencies, 5G will need more cells than 4G networks and 5G cells will typically have peak power requirements higher than 4G sites. Initially at least, this power will be additional to that supporting existing networks.

To reduce energy consumption and OPEX at telco sites and across the telco networks, one answer would be to begin to de-commission previous generations of mobile technology. De-commissioning 2G, 3G and 4G mobile networks would have a net beneficial effect on the carbon emissions from all the networks. However, there are issues with de-commissioning, given that customers and applications rely on 2G and 3G even in advanced economies, smart meters being a key use for 2G, for example. There are also regional divergences: while many Asian countries have fully de-commissioned 2G and countries such as Germany aims to have fully de-commissioned 3G by 2022, by the end of 2019F 46% of consumers of mobile connectivity in Africa still used 2G.

How can telco operators pursue growth through 5G and meet the challenges of the changing business climate?

Surprisingly, telco remote monitoring of indirect (passive) infrastructure is often limited to simple alarms. Granular monitoring is needed across telco infrastructure to improve energy efficiency. By monitoring variables such as temperature and humidity, the heating, ventilation, and air conditioning (HVAC) of telco sites can be energy-optimised. More data means that infrastructure can be managed more efficiently and central systems can automate these processes. Remote monitoring means that operators can better target (and reduce) routine maintenance. When field technicians are required for repairs, they should have a better idea of what the problem is before setting out and hence reduce the number of additional trips that need to be taken.

Better monitoring combined with predictive analytics may take the form of reducing artificial cooling when outside temperatures are lower than usual, or it may pick up cabinet doors that have been left open. Marginal gains can be substantial when aggregated across 30,000+ sites.

Furthermore, using a power quality system ensures measurement of the degree to which the voltage, frequency, and waveform conform to the established specifications.

5. Invest in on-site generation and participate in a greener grid.

Greater use of renewable energy and hybrid solutions is needed across telco sites to replace and demote (to last resort) the diesel generators that are currently used as primary power and back-up for the grid. Diesel theft is a common problem across less wealthy regions; indeed, one African operator spends an estimated $82m replacing stolen diesel and batteries each year. In countries across Africa, APAC and LATAM generators are used because grid supply is unreliable or simply unavailable. As well as expensive (capital, maintenance, fuel and theft), this is an inefficient source of fossil-fuel electricity.

Wider energy orchestration can take the form of on-site solar panels and lithium-ion batteries. A system can store the renewable energy when it is not needed and release it when it is. At on-grid sites further integration can occur, using the power from the solar panels whenever possible and only taking from the grid when necessary. This type of system requires initial investment but can be both cost and carbon efficient in the long run and hence must be evaluated over the full lifecycle.

A further step is for telcos to participate as producers: when they have excess energy generated by solar panels, to sell it back onto the grid. This is restricted currently in many countries by closed energy supply markets but where possible represents true participation in the grid and the Coordination Age. Utility energy suppliers often need additional power during high peak demands during the day, for example due to an increase in air conditioning on high temperature days. Renewable energy and battery storage with intelligent management software from the telco sites can be used to offset this high peak by taking excess power from the solar and batteries. Revenue paid by the utility companies to the telco operator can make the ROI on the renewable investment very positive. 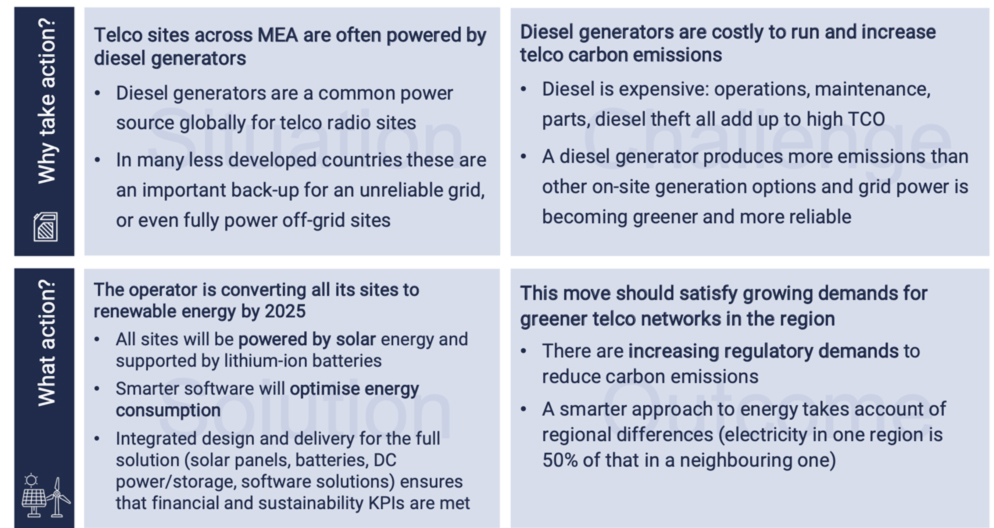 Finally, it is important to acknowledge that the benefits of investing in the right technology to optimize energy consumption of 5G networks are not only for telco operators, but for all sectors benefiting from 5G, such as Healthcare, Aviation or Manufacturing among others.

Find perspectives on your biggest engineering challenges and stay tuned to the latest technology trends in Aerospace, IoT, Energy, Research, and other key industrial sectors.